The new ‘Gentleman’s Racer’ from VanderHeide Motorcycles, introduced at the 2016 Goodwood Festival of Speed, is currently stirring up the world of exclusive specialty motorcycles. Here's my first article about the design process of this Aprilia-powered motorcycle with full carbon fiber monocoque.

In 2011 I received an email from Rolf van der Heide.

"I follow your design work for several years now, which impresses me very much. Nowadays the motorcycle industry is dominated by sharp and edgy designs, but it are still the flowing lines and organic shapes that appeal to me the most. We are currently working on a motorcycle and want to establish a new Dutch motorcycle brand. Our bike will feature some innovative parts, amongst others a full carbon fiber frame and a revolutionary front suspension system. Of course, in addition to the technical eye-catchers, a very attractive appearance needs to be created."

And that's how a five-year spanning process of designing, developing and manufacturing the first VanderHeide motorcycle began. At that time Rolf and I had no idea where this adventure would lead us and we had not strictly decided upfront what kind of motorcycle we were going to develop. It had to be a very sporty single-seat street and track bike for sure, but the exact concept was to be decided during the first creative phases.

Rolf is a big fan of the famous 1989 Britten V-1000 because of the many out-of-the-box technical solutions and he wanted to do "something like that". Tech-wise he drew a lot of inspiration from this ultra-rare bike. However, the Britten V-1000 may be a revolutionary race-winning classic far ahead of its time, style-wise I didn't allow this 27-year old bike to cloud my mind. With Rolf's engineering skills and my sense of style we could and should do a lot better.

With a blank sheet and an open mind I started sketching. Initially there were only three directives for me to work with:

The only visual guideline Rolf provided me with at the beginning of the design process was this picture:

Together with my distinctive style and our shared background with Spyker Cars, me being a car-guy and not so much a motorcycle-guy was one of the reasons why Rolf wanted to work with me. My lack of profound motorcycle-knowledge was regarded to be a great advantage, because it allowed me just the right level of non-conventional thinking. I was more likely to accept new technical solutions and refused to take anything for granted. An advantage that drove Rolf mad from time to time, because I questioned every little detail. The only technical solution I never had second thoughts about was the Hossack-style front suspension.

With motorcycles the spring/damper element is usually positioned close to or in between the wishbones. Norman Hossack himself placed the damper in front of the wishbones and the handlebar of his modified Ducati and Triumph, while BMW, some small manufacturers and many custom bike builders make use of the space between the wishbones, as seen on many cars. Read more about Hossack's double wishbone system on www.hossack-design.com.

Rolf and I agreed the double wishbone system is the best and therefore the only way to go with a carbon fiber frame. Carbon frames mated to conventional telescopic suspension forks have failed many times in the past because of the weak steerer tube. The double wishbone system eliminates this weak conventional head tube and spreads the forces over a large area of the monocoque via four pivots instead of one, resulting in a stronger, more stable and lighter construction. One example of a motorcycle with a carbon fiber frame and Hossack-style suspension is the 2011 Boxer Design Superbob from France. This naked bike shows, as well as the Britten, that carbon fiber and double wishbones are a perfect match. 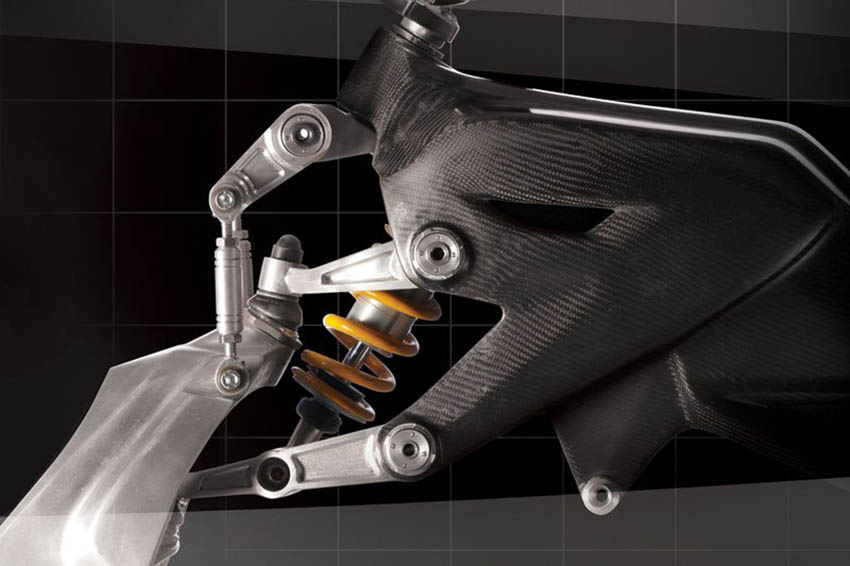 However, to Rolf it wasn't perfect enough. There were still some advantages to gain in terms of weight, stiffness and handling. And, of course, style. With the yet to be designed VanderHeide motorcycle it was the position of the spring/damper element where Rolf had planned his modifications to Hossack's suspension concept.

Every part that could be made of carbon fiber should be made of this lightweight and versatile material. No matter the costs and labour involved. The black fibers provided me with an almost unlimited amount of freedom for the body shape. Because we did not work with a conventional tubular steel or aluminium box frame, there were no pre-defined lines in the technical structure for me to work around. I 'simply' had to deal with the attachment points for the engine, the suspension and the steering system. Easy, right?

I was free to connect the dots in almost any way I liked. The frame, bodywork, fuel tank and air ducts would eventually be all integrated into a one-piece carbon fiber monocoque. This may sound wonderful, but too much freedom can be very difficult to deal with. I must admit I often feel uncomfortable during the first creative phase. Too many uncertainties, too many options. I often found myself lost in piles of quickly made scribbles, staring at unfinished, overly-layered photoshop files. Blank page syndrome...

The main difficulty was the fact that Rolf had not yet figured out the positions, dimensions and shapes of the wishbones and up-rights. I always prefer to let the technical packaging guide me, but in this case I could do nothing more than taking some guesses and find out what happened to the front end of the bike and what would consequently happen with the proportions and style if I varied the shapes and sizes of the wishbones.

I decided to focus on the naked bike concept first to see how the area around the wishbones and steering system would turn out. Different wishbone shapes were tried, as well as various exhaust lay-outs, resulting in many body shape options. I decided not to bother about the radiator position yet and experiment with the wishbones and carbon up-rights first. Should I hide the wishbones in the monocoque? Or should I expose them and make them look cool? Each educated guess for the suspension layout became a starting point for a totally new body shape and it soon became clear that the suspension system had to be engineered as soon as possible. Each variation on Hossack's concept had just too much impact on the overall appearance.

The sketches below show two concepts; one with exposed wishbones and the other with the wishbones hidden between the carbon fiber up-rights and the monocoque. With every concept I also experimented with different front fairings and detail integration. 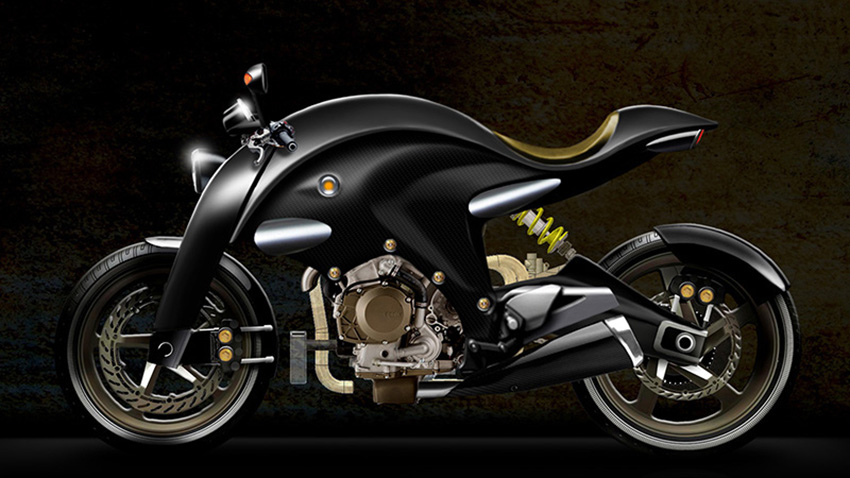 With so many uncertainties it would be a waste of time and imagination to continue sketching, so it was now time for Rolf to start figuring out the suspension system and provide me with a more realistic technical 3D structure to use as an under-layer. This was the moment when Rolf introduced the position of the spring/damper element to me. He positioned it in line with the rear spring, which, as far as I know, has never been done before on a motorcycle. One of the main advantages: at the point where the front and rear shocks meet the opposing forces eliminate each other. This reduces stress on the monocoque and allows us to save some weight.

The placement of the spring/damper element gave me the idea to work with an open tunnel across the 'tank' to make the spring visible and accessible for adjustments whilst riding. I continued sketching and Rolf carried on building the 3D packaging. Around this time it was decided we would position the radiator under the seat (like the Britten). Not an industry's first, but still a rarely seen solution.

The pictures below show the first concept in which the tank-tunnel appears. The tunnel is flanked by two aluminium tubes which serve as air ducts to the radiator and at the same time as attachment points for the handlebar. These tubes would later be gone, but they already show the forward lines of the final model. The shape of the seat area and 'het kontje' (the triangular cover behind the rider) of the final model make their first appearance with this concept. 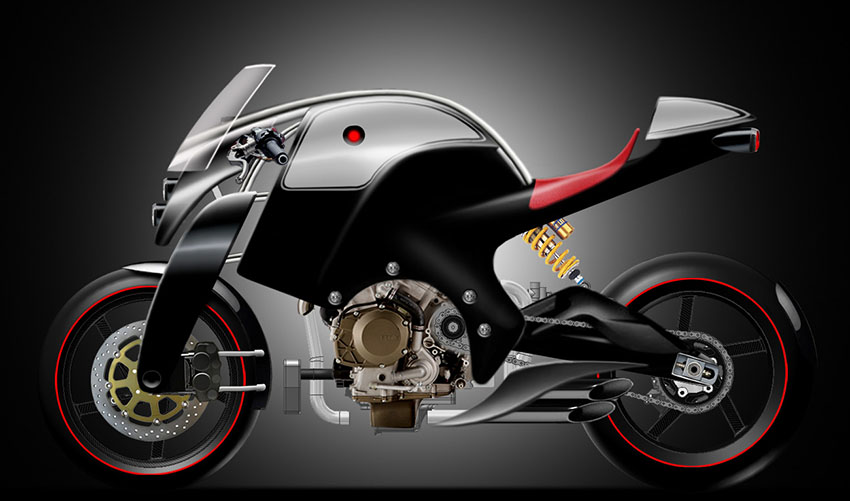 While Rolf worked on the packaging from the inside out, adding part after part, I continued sketching to illustrate how all this would influence the overall appearance. Many technical solutions were discussed one by one and choices were made. When Rolf added the airbox and electronic unit on top of the engine, he had to work around these parts with a reshaped upper wishbone connected to the spring/damper unit via rockers and a pushrod. Formula One style!

The pushrod system determined the minimal height of the tank and so another hardpoint emerged. With the suspension system in place, the radiator under the seat and the battery placed behind the rider, we were closing in on the definitive technical lay-out, providing me with enough hardpoints to narrow down my list of questions, ideas and options.

The preliminary design now features a tapered seat stay, narrowing down all the way to the tail light, so I had to challenge Rolf to design a very narrow, tapered radiator and he had to go and find the smallest battery available that would fit in 'het kontje' right behind the rider.

Finally, it was clear enough how the suspension/steering system and the area around it would be constructed and I decided it was now time to focus on the racer-concept with integrated front fairing. We wanted to make a 'Gentleman's Racer' for both the open roads and closed tracks. Based on the concept with the two aluminum air ducts alongside the suspension tunnel, I sketched many options for the front fairing integration. Here's a small selection.

We wanted the fairing design to be timeless, a bit retro even, (a journalist called the result art-deco) and this turned out to be one of the most difficult styling challenges of our bike, especially in 2D. After all, because of the unconventional carbon fiber monocoque there were no traditional frame lines to construct to. I still feel the many sleepless nights...

In the meantime we decided to erase the aluminum air tubes in favour of two integrated carbon fiber air inlets running from the front, alongside the engine and towards the radiator under the seat. I did some experiments by placing air inlets all over the front fairing to see what would fit and how it would look.

At this point it became necessary to work in real life 3D and we moved on by constructing a full size model of wood, foam and clay to physically work out my styling ideas. I will tell and show all about this process in Part II.